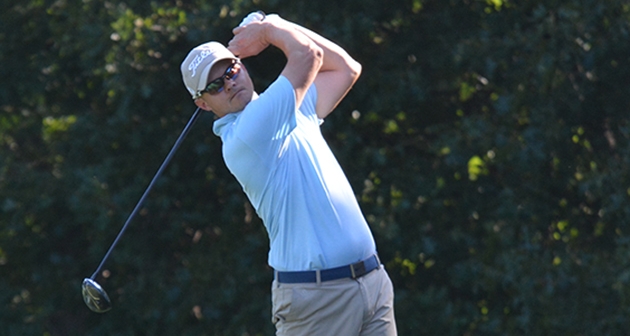 FARMINGDALE, N.Y. -- The formidable Bethpage State Park’s Black Course is a beast of a course. Its narrow fairways, overwhelming bunkers, unforgiving rough and small, elevated greens can give any player quite the challenge. The formula to overcome the Tillinghast design is simple, at least in theory – hit fairways, hit greens and you’re set up for success.

Adam Condello of Locust Hill Country Club, did just that during the second round of action at the 95th NYS Men’s Amateur Championship. He played bogey-free golf and now leads the field by three strokes after carding a 3-under 68 for a two-round total of 137 (-5).

His only slip, though minor, came on his starting hole, the par-4 10th. “I hit a hard toe snap-hook which just stayed out of the bunker in the left rough,” he explained. Condello then laid up his second shot and made a quality 90-yard up-and-down save.

He penciled all pars on the tougher back nine (his starting nine) and the 3,540-yard side of the course became even longer, playing into a steady wind through the turn.

On his way in, the wind began to settle and the Fairport resident found his rhythm. He registered his three birdies on holes 2, 6 and 7. “I was pretty much in control the whole way in,” he said, referring to his final nine. “I like to play aggressively. If I have a chance to hit a driver off the tee I pretty much always will.”

The leader’s strategy will remain the same headed into tomorrow’s final 36 holes. “I’m going to go out and keep doing what I’m doing and hopefully it works out.”

Like Condello, 19-year-old Bard has been navigating the unforgiving course with minimal mistakes thus far. He, on the other hand, has taken a safer approach throughout the first 36 holes of the tournament. “Obviously, a tough course like this, fairways, greens and two-putt pars aren’t going to hurt you. I was playing for the middle of the greens, not too aggressive.”

His comfort with the driver has been helping him avoid trouble, an essential factor in conquering the menacing black course. “I’ve been hitting it really well. I’ve only missed three greens each day,” he mentioned.

Remaining in third is Evan Gaesser of Brook-Lea Country Club, four strokes back from the lead. Gaesser came in one stroke over par today at 72, but remains under par for the two rounds at 1-under 141.

Gaesser, who works with the same instructor as Condello, knows what it will take to have a chance in tomorrow’s final two rounds. “I know for a fact that he’s not going to let his foot off the gas. He’s going to keep taking it deep into the red numbers,” he insisted. “I need to do the same and keep the same mentality I’ve had so far out here.”

Luke Graboyes out of Cornell University Golf Course, who graduated from the Ivy League and accumulated plenty of accolades during his tenure, sits in the fourth spot at even-par 142. Besides Condello and Bard, he was the only other golfer to break par (71) today. “I drove it pretty well, and the misses were very manageable,” he said about his round. “I hit some greens from the rough which is huge out here.”

Two-time NYS Boys’ Sub-Junior Champion, Will Thomson, matched par this afternoon and is alone in fifth at 143 (+1). At age 16, this is the Oak Hill Country Club member's first NYS Men’s Amateur and he finished with two key birdies on his back nine to keep him in contention.

After the two-round cut of low forty players and ties (as well as anyone within ten strokes of the lead), forty-six players survived to take on the grueling 36-hole final tomorrow. The cutline fell at 10-over 152.

Players will tee off of both #1 and #10 tomorrow in pairs of two, beginning at 7:30am. The fourth and final round of the championship will begin at 1:30pm, with pairings alternating their starting tee.