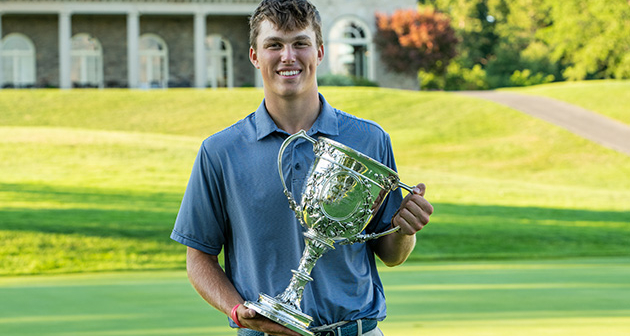 FAYETTEVILLE, N.Y. - The final round of the 99th New York State Men’s Amateur Championship finished with a record-breaking performance on Thursday.

The Westchester native went into the final 36 holes at Onondaga Golf & Country Club on Thursday at 7-under, tied with RaNic Golf Club’s Nic Whittaker. Berridge pulled one stroke ahead after round three on Thursday morning, recording seven birdies in the process.

Elsewhere on the course, Brook-Lea Country Club’s Jason Lohwater was going low. He fired a third round 66 to make it tight heading into the fourth and final round in the afternoon.

Lohwater entered the fourth round just one stroke back of Berridge but took the lead after he birdied no. 3 and Berridge bogeyed no. 2.

Lohwater’s only major slip of the final round came in the form of a double bogey on the par-3 eighth and from that point on he would never regain the lead.

Berridge, who is a member of the University of California men’s golf team, chalked up four impressive birdies on the back nine to pull away and win the championship by three strokes.

He fired a 270 and broke the to-par record that stood for ten years after Dominic Bozzelli’s mark in 2012 at Elmira. Lohwater would have tied the record if Berridge had not shattered it.

Whittaker was in contention for much of the day but could not keep pace with the onslaught of birdies that Berridge produced. Nor could River Oaks Golf Club’s James Blackwell, who was tied for third after the first two rounds. He finished tied for fifth place at 4-under 280.

“I started on it this morning … I played the back nine really well all day, the putter was working," Berridge said.

Berridge is the second Scarsdale High School product in as many years to win this event, following James Allen in 2021.

“I was super proud of [Allen] when he won last year, and I came here thinking it would be nice to have back-to-back Scarsdale High School guys win,” Berridge said. “We have a little friendly rivalry, so it felt good having him hand the trophy to me.”

Lohwater finished at 11-under 273, four-strokes ahead of Whittaker, who finished in third.

“I worked really hard this summer and I haven’t always played that great in my events,” Lohwater said. “This is one that you look forward to at the end of the year. It’s a really prestigious event and it feels good to play the way that I know I can.”

Shane Broad remained in the mix on the final day as he fired a 68 in round three. But the Crag Burn Golf Club member turned in a 2-over 73 in his final round to fall to fourth place for the tournament.

Tied with Blackwell was Matthew Ferrari, of Metropolis Country Club. He fired rounds of 71 and 70 on Thursday to finish in fifth place.

Jiarong Liu of Irondequoit Country Club finished tied for seventh. In the morning, he posted one of the low rounds of the tournament with 65 to surge up the leaderboard, followed by a final-round 76 and 1-under 283 total.

Also finishing at 283 was 2021 champion Allen of Scarsdale Golf Club.

The low 20 golfers and ties earn an exemption to next year’s 100th NYS Men’s Amateur Championship, which will be held at Wykagyl Country Club in New Rochelle.