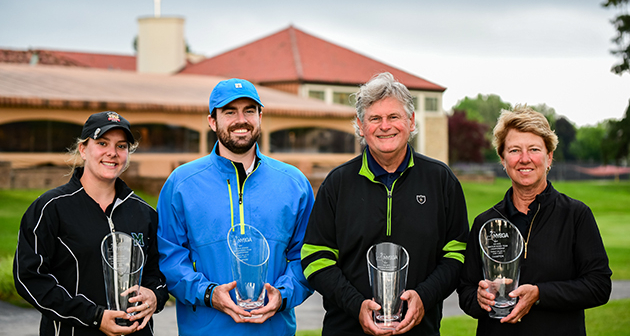 Gaelin and Michael Carrig (Springville CC) were one of five teams tied for the lead as they walked onto the 18th tee box. Michael found the fairway with his drive and Gaelin was able to reach the green in two.

The Carrig duo still had work to do, as they were left with a 30-foot putt for birdie. Michael lined it up and rolled it in, sealing the victory at even par for the tournament.

I was just thinking, have good speed because I didn't want a super comebacker or ram it by and leave her with an eight-footer coming back,” Michael said. “I just wanted to have good speed and it happened to fall.”

The duo from Springville Country Club started hot and jumped out to an early lead. They birdied four of their first nine holes. Michael credited Gaelin’s putting for their string of birdies.

“Just setting her up and she was draining 12-footer, 15-footer, a couple good putts by her right in a row,” Michael said.

“Good approach puts you in a good spot,” Gaelin said.

This is the first event the cousins have played in together and Gaelin’s first New York State event.

This is the second straight year that the Pennington duo has finished in second place. They held the lead until back-to-back bogeys allowed the competition to close the gap down the stretch.

Heavy rain throughout the morning delayed the shotgun start from 12:30 p.m. to 1:30 p.m. The wet, rainy conditions continued throughout the afternoon and into the evening.

This is Kaul’s fourth state title. She is a three-time NYS Women’s Senior Amateur Champion, having won in 2008, 2015 and 2021, but the mixed team is her first team win.

“It’s awesome to play a team event,” Kaul said. “I think we play off each other very well and we know each other’s strengths … Andy is a great putter and hits a great ball off the tee, and me with a wedge in my hand, we’re golden.”

“I was just thrilled that Kim invited me again to play,” Melnyk said. “I know what a great player she is and it’s just an absolute honor to play with her.”

Kaul and Melnyk had the lead down the stretch and held on at 3-over 75. They were paired with 2019 champions Traci Petrillo (Penfield CC) and Stuart Harris (Oak Hill CC) who applied pressure to the leaders, finishing one stroke off the lead at 4-over 76.

2019 Women’s Super Senior Champion Kitty Colliflower and Fred Kulikowski (Oak Hill CC) finished in third place at 5-over 77. They were followed by the defending champion Webbs and Christy Malo (Park CC) and Nick Amigone III (Transit Valley CC) who finished at 6-over 78.