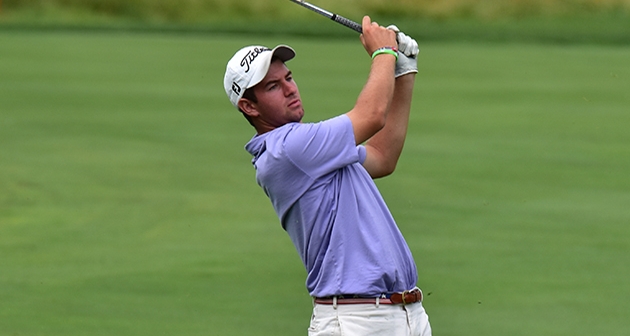 Young closed the door on professional Chris Deforest (Rondout Golf Club) during the second playoff hole, the par-4 1st, where he finished with a birdie to secure the victory.

The hole prior (18th), Young struggled off the tee but wedged a perfect 40-yard approach shot within a foot of the flagstick to save par and extend the playoff.

During Thursday’s final round, he tied the course record with a dazzling 7-under 64 to equal Deforest’s three-round 204 (-9). The 20-year-old attacked the course early, sliding in consecutive birdies on holes 2, 3 and 4. He carried that momentum into an eagle on the par-5 7th hole, where he did most of his damage throughout the week (birdie-birdie-eagle). On his way in, he knocked down three more birdies including his last on the 16th hole, which minimized the damage from his only bogey of the day on the tough 460-yard par-4 15th.

Entering the final round, Young sat in fourth place and four shots back of pro’s Deforest and Josh Rackley, the co-leaders. Tuesday and Wednesday, Young stayed under par (71) but was unable to break 70, posting that number exactly on each of the first two days of competition.

Since young is an amateur, runner-up Deforest walked away with the cash prize of $17,500.

The rising junior at Wake Forest has been no stranger to big-stage success throughout his amateur career, with appearances on both the Junior Ryder Cup team and Junior World Cup team in 2014. That same year, he finished sixth at the Junior PGA Championship and won the Metropolitian Golf Association's (MGA) Met Junior Championship. He was the youngest winner of the MGA’s Ike Championship in 2015 and recaptured the title in 2016.

Last week, he once again qualified for the U.S. Amateur at Brae Burn Country Club’s sectional qualifier where he earned medalist honors. The Demon Deacon has now qualified for the championship four years in row, advancing into the match-play bracket in the last three, with a quarterfinal appearance in 2014 and reaching the round of 16 in last year’s tournament. The young star from Scarborough also competed in another USGA championship, the 2016 U.S. Amateur Four-Ball in 2016 where him and his teammate, Paul McBride, reached to the round of 32.