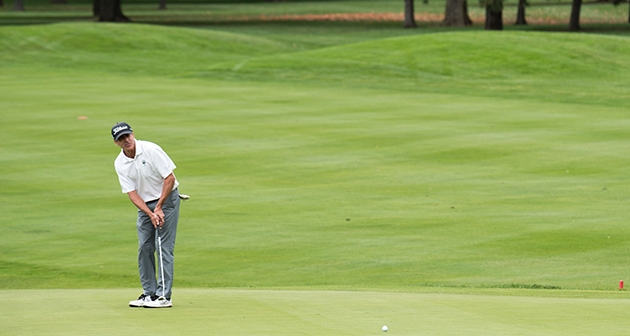 Bufalini Breaks Par to Lead After Opening Round of Senior

MANLIUS, NY – Only one player managed to shoot under par during Tuesday’s opening round of the 2019 NYS Men’s Senior & Super Senior Amateur Championship on a rainy, turned cold and windy day at Cavalry Club in Manlius.

Leading is John Bufalini of Ives Hill Country Club who shot a 1-under 71 on the 6,437-yard layout, and holds a one stroke advantage.

“I really like this course, it sets up well for my game. Today I was trying to get myself in position and avoid any big mistakes, and that’s what I did,” he commented about shooting in red numbers.

Pratico, who played in the morning, slipped a bit in the wet weather to start but maintained his focus and went 2-under on his back nine.

“It was brutal. I was just trying to hold onto the club,” he mentioned of playing in heavy rain to begin the tournament. “Course is in great shape; the greens are rolling nice. The putter saved me pretty much all day. It kind of reminds me of Brookfield,” referring to the buffalo-area course where he won a few years back.

Russo, who played in the afternoon, started strong with three birdies on his first five holes and turned at 3-under. On the backside, he offset a bogey on the eleventh, with an eagle on the par-5 fourteenth. He then found trouble on the par-3 sixteenth, and was unable to minimize the damage, which brought him to even par for the opening round.

“Everything was going great until sixteen. I played well for 4 hours and twenty minutes I didn’t play so well. That’s the way it goes sometimes, tomorrow’s another day.”

“It wasn’t a pleasant start, but I managed to keep it together and play even par the rest of the way,” Hughes noted of going three-over through his first four holes.

In the Super Senior Division, for ages 65 and older, John Hamilton of Hudson National Golf Club posted a 1-over 73 to lead the division after 18 holes.

“The course was absolutely fun, I enjoyed it. Hit a lot of fairways and greens, that was the better part of the game today. All in all, I had a solid round.” The 2017 runner-up explained.

“It’s always nice to start any tournament with a strong round. There’s a lot of golf left to play, but it is nice being in the position I’m in. I’m looking forward to the next two rounds,” said Hamilton.

“I struck the ball really well, and only missed one fairway the whole day. I just couldn’t find the speed of the greens. I switched putters yesterday during my practice round,” said Burns, who became eligible for the Super Senior tournament this year.

“It’s the first round, you just try to keep yourself in the game. I enjoyed it, it was fun, it wasn’t that frustrating. I felt pretty good throughout the day,” he said about opening his defense.

After tomorrow’s round, the two divisions will be cut to the low 50% of the field and ties for the final 18 holes of the championship to be conducted on Thursday morning.