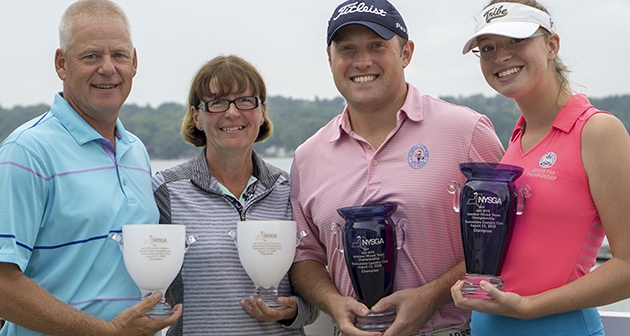 Madison, of Shaker Ridge Country Club, and Nicholas, of Town of Colonie Golf Club, won the championship by four strokes over the field. The next closest team, was 2016 winners Andy Conway of Ravenwood Golf Club and Sara Eichelberger of Brook-Lea Country Club at 75.

Finishing in third were defending champions Julie & Michael Murphy of Brookfield Country Club at 76. Tied alongside them was Mark & Alexandria Battle of Ravenwood Golf Club.

The Braman’s took full advantage of the longer holes at Skaneateles, shooting 6-under throughout the layout’s four relatively short par 5s. Starting on hole #3 during the shotgun format, the pair eagled the 18th and then their final hole, #2, to create the separation they needed to take home the trophies.

Winners were also decided for best net score in each division. Mike Farina & Marylee Pollard of Ballston Spa Country Club came out on top with a net 5-under 66 (85 gross).

In the concurrently played senior division, the couple Kevin & Lisa Webb of Mendon Golf Club won by a stroke and registered the lone round under par in the field.

They carded a 1-under 70 which included five birdies and four bogeys, and started hot at 2-under after their first two holes. They slipped a little bit on Nos. 7 and 8 with consecutive bogeys, but steadied the ship the rest of the way.

Defending champions Jim & Patty Schaefer came in seventh, and were unable to get much going during the tournament’s defense.

Net winners for the senior division were John & Vickie Lavalley, who finished at 10-under 61 (81 gross) to win the honors.