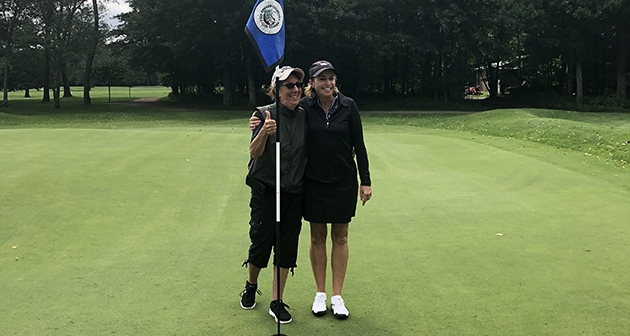 THENDARA, N.Y. – Tammy Blyth knocked down a par on the second playoff hole to win the 2018 New York State Women’s Amateur Championship at Thendara Golf Club in the heart of the picturesque Adirondacks.

The champion from Monroe Golf Club, sat tied with two former champions at the end of the tournament’s 36 holes of stroke play. Blyth, along with Kim Kaul of Gowanda Country Club and Susan Kahler of Ballston Spa Country Club, finished at 10-over 156.

The duo then teed off into the signature par-3 ninth hole, which has a table top green that falls off on both sides with intense undulations, a common occurrence on Donald Ross designs.

The hole location was set on the right side of the green, and Blyth secured her par while Kaul was unable to match it, rewarding Blyth with her first state title.

Kaul and Blyth, who were the co-leaders after Tuesday’s opening round, both shot 78-78, while Kahler finished with 76 to join the leaders, which was the low round in the tournament.

Finishing in fourth was Carolyn Mancini of Binghamton Country Club at 158.

Mary Sicard of Queensbury Country Club, who claimed the last two consecutive titles, posted an 83 in the final round to finish in seventh at 162.

Former Women’s Amateur champion, Mary Jo Kelly of Wolferts Roost Country Club, had a 36-hole total of 163, good enough for eighth place. She was the runner-up at last year’s championship.

Blyth was a co-leader after the opening round in 2017, but couldn’t hold her lead and eventually finished in third place. The two years prior, she finished as runner-up (2015 at Thendara) and tied for third (2016 at The Whiteface Club).

This year, she took those tough lessons from the past few years and was finally able break through.

In the Super Senior division, Ronnie Levine-Ribble posted the field low of 78 in the final round to win the championship by a stroke.

Havens, who won her first championship in 2015 at Thendara and another the following year at The Whiteface Club, carded another 79 and came in at 158 to earn runner-up honors.

Kitty Colliflower of Oak Hill Country Club, came in at third in her first year of eligibility and posted a 164.

2014 champion Michelle Marquis of Pompey Club, was fourth at 165.

Next year, the championship will head to Bristol Harbour Lodge & Golf Club in the heart of wine country. The club boasts a Robert Tent Jones design overlooking Canandaigua Lake, one of the eleven finger lakes.