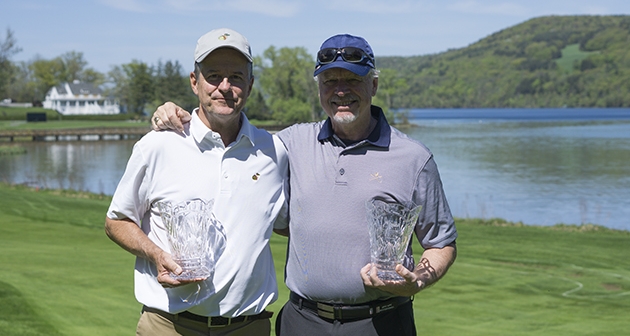 The partners from Oak Hill now have two team state four-ball championships under their belt, their first being when they won the inaugural event in 2012 at Ravenwood Golf Club.

The runner-up team was Bill Paulsen of Eagle Crest Golf Club & Jim Mueller of Orchard Creek Golf Club who combined for a 135 over the two rounds.

Blank & Dugan’s final round 64 was tied for a tournament low with one other team competing in the open division (Dave Pallas of Saratoga Spa Golf Course & Jimmy Welch of Olde Kinderhook Golf Club).

“Big difference was we didn’t make any bogeys today, and had a few extra birdies,” said Dugan on their round two score. “I don’t think we had a three putt today,” mentioned Blank.

The friends from Rochester enjoy playing together and have been competing in four-ball events together for quite a while. “Tom and I have been playing best-ball tournaments for 30 years, and we’ve won a lot of tournaments,” Dugan remarked. “I don’t know if we’ve ever gone that low.”

The senior division, for golfers 55 and older, ran concurrently with the open division at a shorter yardage of 6,040 yards (versus 6,401 yards) and played to the same par of 72.