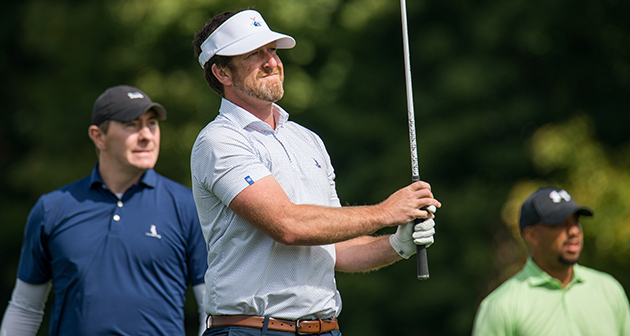 HAMILTON, N.Y. -- Crag Burn's Billy Hanes surged to a three-stroke lead in round two of the 38th NYS Mid-Amateur Championship.

Some new names appeared at the top of the leaderboard after players had their second crack at Seven Oaks Golf Club. The dryer conditions didn’t surrender lower scores, as Friday’s leaders faltered.

Hanes, a two-time NYS Four-Ball and Boys' 14U Junior Champion, fired a 70 on Saturday. His 2-under performance on the day put him at 3-under for the championship and gave him a three-stroke lead heading into Sunday’s final round.

“I was able to play another consistent solid round,” Hanes said. “I just have to keep that going tomorrow, and if I do, hopefully it’s enough.

Hanes, who's already claimed the Erie County Amateur and Buffalo District Match Play title this season, is the only player in the field to fire under par in both rounds.

Another NYS Boys' Junior champion matched Hanes’ low score for the round. Ben Bates, of the NYSGA eClub – Capital District, eagled the par-5 eighteenth, his final hole of the day, to slide into a five-way tie for second place.

“I had a lot of good chances and just tried to stay patient knowing pars were good scores,” Bates said. “As far as what changed today, I would say the weather. It was just easier to play, yesterday was so cold … It was tough and it was today … Yesterday, once you hit it, it was at the mercy of what the wind was doing.”

Bates’ 2-under Saturday brought him to even par for the tournament in a five-way tie for second place.

Joining him were 2021 Mid-Am champion Carl Schimenti and, yet another former Boys’ Junior champion, James Blackwell.

Schimenti, of Cornell University Golf Course, fired back-to-back even par rounds and left himself with a good chance to pull off a repeat.

“Two different days I played two different ways to shoot the same score,” Schimenti said. “Yesterday I hit the ball really well and felt like I didn’t make a bunch of short putts. Today was the opposite, kind of grinding around, wasn’t hitting it very well and not in the fairway very often, but just leaving myself below the hole, trying to be smart.”

Blackwell, of River Oaks Golf Club, stayed at even par for the tournament with his second straight round of 72.

Brook-Lea Country Club’s Kevin Lewis took the lead in the early afternoon and an eagle on the par-5 fifth extended his lead. The lead was short lived as bogeys on no. 7, no. 8 and a double bogey on no. 10 pushed him back. Another bogey on no. 14 would leave him at even par for the tournament, where he would finish round two.

Brad Monroe, of Onondaga Golf & Country Club, put together a 1-under Saturday to join the four other players tied at even par.

A second cut was applied to the field and the 30 top players will head into the final round on Sunday. The 36-hole cut fell at 8-over 152.