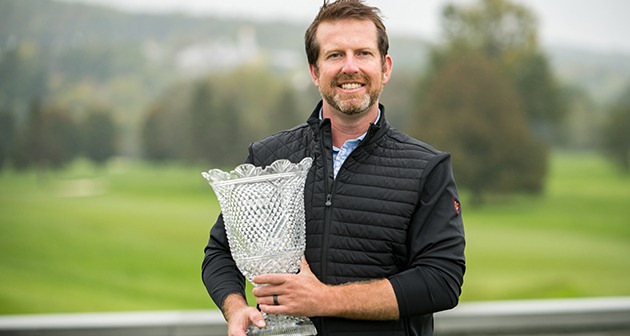 HAMILTON, N.Y. – More rain rolled through Seven Oaks Golf Club on Sunday as the final round to crown the 38th NYS Mid-Amateur champion was underway.

Crag Burn’s Billy Hanes posted 1-under to claim the title by two strokes. He finished with a three-round total of 4-under par 212.

He was the only player in the field to fire all three rounds under par in tough fall conditions throughout the weekend.

Hanes entered the day with a three-stroke lead, just as he did in 2018, when he ultimately lost the championship in a playoff at Wanakah and finished runner-up.

“I haven’t won an individual state title since 2000,” Hanes said referring to his first NYSGA victory as a Boys’ 14U Junior. “It feels great to win. I hope I can get better in state, national and local events for years to come.”

“I knew that the rain was coming, and I am not a good rain player,” Hanes said. “I was confident, but I wasn’t that confident mostly because of the rain.”

Hanes played consistent golf from the start and turned at even par.  He dropped a stroke on the par-3 11th, and missed a short birdie putt on the 12th, which opened the door for Locust Hill Country Club’s Kyle Downey.

Downey strung together three straight birdies beginning on the drivable par-4 13th. He took the lead on the scorable backside at Seven Oaks while Hanes was a few groups behind him.

After hitting his drive just right of the green on 13, that was playing up at 282 yards Sunday, Hanes chipped in for eagle to regain the lead. It was a lead that he wouldn’t again surrender, as Downey eventually three-putted for bogey on the 18th while Hanes knocked in a birdie on the 16th.

Downey matched the tournament low round with a final-round 69.

“I felt like I was playing really well the last couple days, I just had a couple of bad swings and a couple of bad holes that didn’t allow me to get anything going,” Downey said. “I finally got something going today, especially on the back at the turn, where I made three or four birdies in a row.”

He would finish in solo second place for the tournament at 2-under 214, two strokes shy of Hanes.

“Runner-up is definitely an accomplishment but I’m still knocking on the door waiting for that first win of some kind,” Downey said. “It’s just a little bit frustrating and it’s going to have to wait for another time.”

2021 champion Carl Schimenti, of Cornell University Golf Course, shot even par in all three rounds to finish in third place.

Rounding out the top five were Jacob Katz, of Brookfield Country Club, and Jim Gifford, of Mohawk Golf Club.

Katz also fired a 69 on Sunday to climb the leaderboard and finish tied for fourth with a 1-over 217. Gifford also finished at 1-over, putting together an even-par final round.

The top 20 finishers earned an exemption into next year’s championship which will be hosted by Crag Burn Golf Club, Hanes’ home club.

The top 10 finishers earned an exemption into next year’s Men’s Amateur which will be hosted by Wykagyl Country Club.