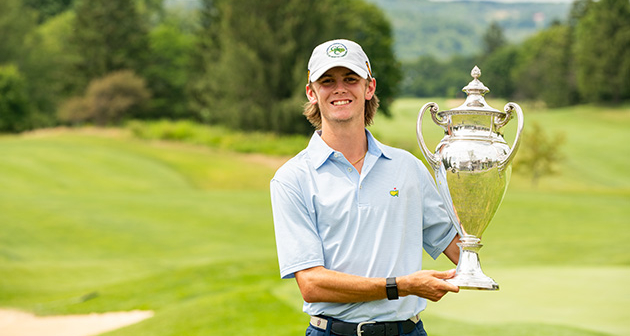 Berl Claims 80th NYS Junior Am at Soaring Eagles, Olearczyk Repeats in 14U

HORSEHEADS, N.Y. -- The 80th NYS Boys' 18U Junior Amateur Championship went down to the wire on Wednesday at Soaring Eagles Golf Course.

Country Club of Rochester’s Jack Berl sank a birdie putt in front of a crowd of spectators on the eighteenth green to take the lead, and that would prove to be enough to seal the victory.

Crag Burn Golf Club’s Jacob Dantonio, who held the lead after the first round and was two groups behind Berl, maintained his lead for most day two, but a bogey on #14 pushed him into a tie with Berl at even par heading down the stretch.

Both players converted pars on #15, #16 and #17 until Berl’s clutch birdie on #18. Dantonio gave himself a good look to match Berl, but his birdie attempt burned the right edge of the cup. He tapped in for par and a second-place finish.

Berl was the only person in the field to birdie the finishing hole during the final round.

The Rochester native was four-strokes back heading into the second round and said he knew he had to put up a low number to give himself a chance at the victory.

Berl’s only bogey of the day came on the tough opening hole par-4, and he tallied four birdies to come in at 3-under 68 on Wednesday afternoon and 1-under 141 for the tournament.

“This might be my last junior event that I’ll play in,” Berl said. “This just brings it all together and caps off a really good junior career.”

Berl not only brings home a state title and Hickock Cup, but an exemption into the 99th New York State Men’s Amateur at Onondaga Golf and Country Club from August 9-11.

The recent high school graduate is headed to High Point University in the fall where he will play on the golf team.

“Off the tee I was pretty average, but I putted pretty well which saved me,” Dantonio said. “The last hole I gave myself a chance and just barely missed.”

His even-par total of 142 left him two strokes ahead of the third-place finisher, the NYSGA eClub – WNY’s Owen Rooney. 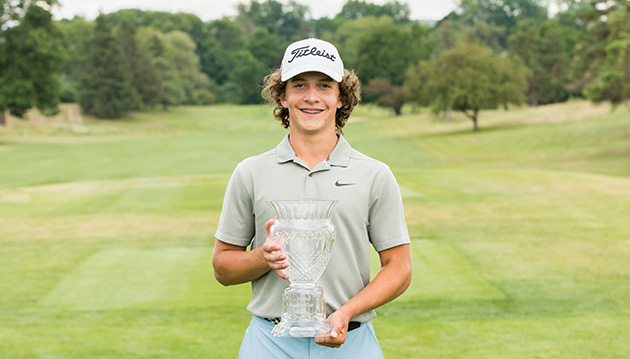 In the 65th NYS Boys' 14U Junior championship, Jacob Olearczyk of Barneveld succesfully defended his title and won by three strokes.

After the first round, he was three strokes behind first-round leader Dan Young of Bellevue Country Club, who fired 4-under 67 on Tuesday.

“It’s a different mindset when you’re coming from behind instead of the same at the start,” he mentioned of the difference between last year and this year. “Going into today I obviously knew the course pretty well. I knew where I could make some moves to gain some shots being three shots back.”

Olearczyk posted another good number (73) in the second round, while Young posted an 80 to fall into third place.

“Me and Dan are pretty close, we play in a lot of tournaments together. I knew Dan was going to hold his own, and he did for the most part,” said 14-year-old Olearczyk who plays in many of the junior events in Central NY.

Michael Clifford-Levy of East Hampton Golf Club was the runner-up at 3-over 145.

“I hit a lot of fairways this week especially today, I was putting myself in good positions off the tee so I think that really helped,” said Clifford-Levy. “I didn’t think I was going to because I was six back entering the day, and just tried to post a good score and not look at the leaderboard. I was really happy to figure out after the round that I’m the runner-up.”

Young finished at 147. Cole Jones of East Aurora Country Club and Joey Bueme of Country Club of Buffalo tied for fourth at 150.

“I’ve been there before, knowing that I’m going home with the trophy hasn’t fully set in yet but the car ride home it definitely will,” said the two-time champion.