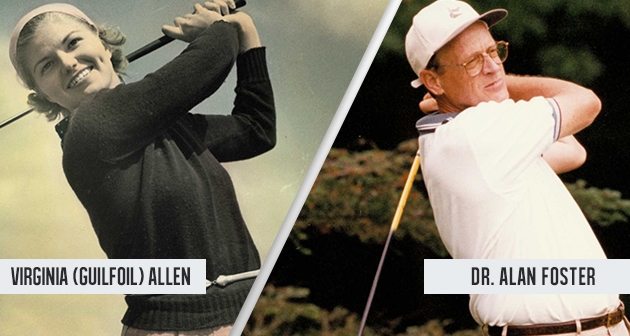 Check out the full NYSGA Hall of Fame Induction - Class of 2017 video below!

Throughout the evening's cycle, it was evident that these two deserving candidates have left long-lasting impressions and have positively influenced countless individuals in New York State's amateur golf community...and beyond! The newest members, Allen and Foster, will join the eleven existing inductees who were selected during the first two Hall of Fame Inductions at Oak Hill Country Club in 2012 and the Country Club of Rochester in 2015.

Two distinguished amateur golfers from Syracuse are set to be inducted into the New York State Golf Association Hall of Fame – Class of 2017, including Virginia Guilfoil Allen (1917 - 2008) and Dr. Alan Foster.

The official NYSGA Hall of Fame Dinner and Induction Ceremony will take place at the duo’s home course, Bellevue Country Club on October 14, 2017. Family, friends and golf enthusiasts alike are invited to join the NYSGA in honoring these two worthy individuals who’ve left lasting impressions on amateur golf through their numerous accomplishments at the local, state and national (even international) levels.

Admission for the event includes hors d'oeuvres, dinner, open bar and the opportunity to be a part of a very memorable evening honoring our newest class of inductees!

Anyone interested in purchasing tickets can do so via our online event registration (see instructions below).

Registration for the event has been closed.

This is the third Class to be elected to the NYSGA Hall of Fame. The NYSGA Hall of Fame Inaugural Class was inducted in November of 2012 at Oak Hill Country Club in Rochester, N.Y. and includes Donald Allen, Ray Billows, Frederick Box, Betty Deeley, Grantland Rice and William Tryon. The second Class was inducted in October of 2015 at the Country Club of Rochester and includes John Konsek, Thomas Reidy, Donald Ross, Lancy Smith and Samuel Urzetta.

“It is a well-deserved honor for both individuals, who’ve thoroughly demonstrated strong contributions and accomplishments at the highest levels of amateur golf in New York State,” said Joe Enright, the NYSGA Hall of Fame Committee chairman.

Virginia was born in Syracuse in 1917 to Oscar and Teresa Guilfoil. In 1933 at age 16, she captured the first of her nineteen Syracuse Women’s District Golf Association (SWDGA) titles. Known as “Ginnie”, she was one of the founding members of the SWDGA (1933); the organizing body for women’s golf. That included serving as the group’s president from 1966-67.

That same year she recorded a course-record 82 at SYCC. In short order, Ginnie established two other course records, first at the Tuscarora Golf Club (a 73 in 1937) while a year later her 76 set a new standard for the Lake Placid Club.

Her golf game traveled well as in alternate years (1937, 1939 and 1941) she captured the Mason-Dixon President’s Trophy at the Greenbrier Course in White Sulpher Springs, West Virginia. In 1937, she was runner-up at the prestigious Women’s North and South Amateur held at the famed Pinehurst (NC) Country Club.

After spending some years in Alexandria, VA due to her husband Phil Allen being in the U.S. Navy, the couple returned to New York and resettled in Syracuse. Starting in 1955, when the family joined the Bellevue Country Club, she would reign as the women’s club champion for 23 consecutive years!

While a pacesetter in Syracuse women’s golf, the Syracuse University graduate gained statewide recognition in 1941 when her name was inscribed on the NYSGA Women’s Amateur Championship trophy, the Oak Hill Country Club Championship Cup, after a victory at Siwanoy Golf Club in Bronxville.

Finally, in 1970, nearly 30 years after her first NYSGA title, she would win the first of her Senior Women’s titles at the Whiteface Inn Golf Course. She repeated as champion at the same site five years later in 1975.

As her golfing exploits accrued, so did her off-course honors. In 1959 at age 42, Virginia was named as “Woman of Distinction” by the Syracuse Post-Standard newspaper. In 1981, Allen became a charter member of the Syracuse University Orange Plus Hall of Fame. Later, in 1986, she was the first woman presented with an honorary Letterman of Distinction Award by Syracuse University.

A year later, in 1987, Virginia Allen was among the inaugural class inducted into the Greater Syracuse Sports Hall of Fame.

Preceded in death by Phil in 1995, Virginia Allen died in August of 2008 at age 91. Today she is survived by son Phil Allen, Jr. and wife Sherri; daughter Ginnie and husband Rick Russo, six grandchildren and fifteen great-grandchildren.

Named “Woman of Achievement” in 1959 by Syracuse Post-Standard Newspaper

Raised in Waterbury, CT, Alan’s links career was spurred by his father’s interest in the game. Later, while undertaking a pre-medical major at DePauw University, he lettered on the school’s golf team for two years. Beginning in 1963, the Foster golfing career was put on hold for over a decade as he first earned his Masters Degree at Little Rock Medical Center (1964-65) and then his MD at the Indiana Medical School (1966-70). He moved to the Syracuse area to complete his internship at the local St. Joseph’s Hospital in 1970. While in residence at SUNY Upstate Medical School from 1971-75, he completed a specialization in radiology.

It was at that point that Dr. Alan Foster was appointed to the St. Joseph’s Hospital staff and resumed his interest in golf by becoming a member of Bellevue Country Club in 1974.

Locally, Foster would go on to win ten crown jewel events including eight Gerry Ashe Memorial and two Post-Standard Amateur titles. Foster’s dominance in the Ashe competition is reflected by the fact that he won consecutive titles on four occasions: 1982-83, 1987-88, 1993-94 and 1996-97. He would have won five consecutive Ashe’s, but conservative play on the final hole of the 1995 event resulted in a stymie and a one-shot loss.

The Foster record was further enhanced with his capture of the Post-Standard Amateur in both 1980 and 1986. Post-Standard senior titles followed in 1999 and 2009. As a measure of his golfing consistency, the Foster name was among the group of local amateurs chosen to compete against area professionals for 23 of the first 25 years of the annual Mitchell Cup competitions. In recognition of his various accolades and local dominance, Foster was inducted into the Greater Syracuse Sports Hall of Fame in 2000.

Perhaps the most impressive accolades on Dr. Foster’s golfing record are his achievements at the national and international level. Nationally, one of Foster’s best years on the links was 1999 where he finished second in the prestigious National Senior Porter Cup, won the Congressional Golf Club (DC) Four-Ball Tournament in Washington, D.C. and finished second in the NYSGA Senior Championship.

Earlier in 1991, he partnered with Tom Hamilton to capture the Hugh Wilson Invitational at the Merion Golf Club in Ardmore, PA. His golf travels have allowed for play at many of the nation’s most prestigious courses and he numbers Merion as his favorite venue while citing Winged Foot West as the most competitive he’s played.

Internationally, the golfing doctor began competing abroad as early as 1981 when he reached the third round of the British Amateur played at the Old Course at St. Andrews. Two decades later, he made his way back across the pond to compete in the British Mid-Amateur Championship in 2000.

The trip overseas became consistent, as he participated in the British Senior Amateur five different times, earning his most prestigious title in 2005 when he won it at the Woburn Golf Club.

Today, Dr. Alan Foster still tees it up at Bellevue at age 74 with the goal to shoot his age, an accomplishment he frequently eclipses.