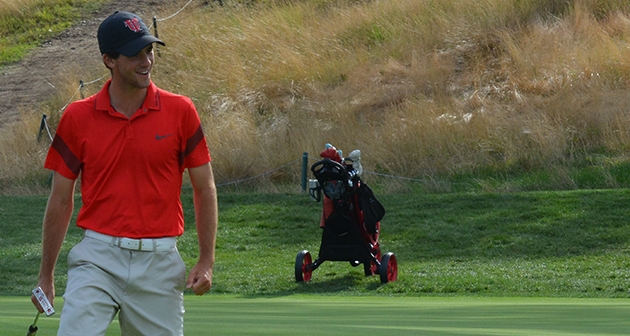 FARMINGDALE, N.Y. -- On a windy afternoon at Bethpage Black, Gray Barnes birdied three out of his last four holes to finish with a sizzling 5-under 66 during the opening round of play at the 95th New York State Amateur.

Five-time New York State champion Jim Scorse is two shots back at 68. Scorse started slow, with two bogeys in his first five holes, but found a rhythm throughout his round and was 5-under the rest of the way.

Evan Gaesser, of Brook-Lea Country Club, carded seven total birdies to post a 2-under 69. Tied with Gaesser in third is NYSGA newcomer Kyle Brey, of the home club, and Adam Condello of Locust Hill Country Club.

Two other players finished under par, both four strokes behind the leader at 1-under 70. The duo includes Clancy Waugh of Deepdale Golf Club and Christopher Gabriele of Huntington Country Club.

The 21-year-old out of Centennial Golf Club started with a birdie on the opening hole. From there, he proceeded to knock down an additional four on the front side alone for a 32 at the turn. He finished with eight total birdies on his scorecard and posted his lowest career tournament round.

“My drives are what really gave me an opportunity to score so well,” he mentioned of his length off the tee. “It’s usually the best part of my game when I’m playing well.”

The rising senior at University of Tampa, now holds a two-shot lead over the field. “It was probably the best putting round I’ve ever had. I made most of my twenty-footers. I didn’t miss many greens and when I did, my short game saved me.”

Scorse, who won last year’s NYS Mid-Am championship at his home club, Stafford Country Club, had five birdies in the last twelve holes to end up three-under. “I got off to a little bit of a bad start,” he said about his two bogeys on the first and fifth holes. “Towards the end, I started loosening up. I was keeping it in the middle and giving myself some opportunities.”

The 52-year-old was two-over through six, but turned things around on Nos. 8 and 9 to get himself back to even. “That was pretty much the turning point. It settled me down and got back to even par.” From there on, he avoided any hiccups and scored on the twelfth, fifteenth and eighteenth holes to shoot up the leaderboard.

“If I play even-par from here on in, I’d be very happy,” revealed Scorse.

Brey, who grew up in Farmingdale and knows “the Black” very well, was satisfied with his opening round. “I made pretty much everything I looked at,” including a forty-foot birdie on the iconic par-5 fourth hole after leaving his second shot deep in a greenside bunker. “I wanted to shoot 4-under today, I know the course well enough. I’m happy with how I finished."

Gaesser too, feels comfortable with the course. “I played it for the New York State Federation Championship a couple of years ago in my junior year of high school. The condition of the course is always fantastic, everything out there is pristine.” Although he slipped with two doubles on Nos. 5 and 8, he maintained his composure with three more birdies down the stretch.

“I was definitely frustrated,” he said about the errors. “I worked hard for those birdies early on, but stayed focused and kept grinding.”

Condello, age 34, has plenty of New York State Championship experience under his belt. He’s finished as runner-up in three NYSGA championships in the last couple of years, first at 2015 Men’s Amateur at Kaluhyat Golf Club and the last two NYS Mid-Ams at Wolferts Roost Country Club in 2015 and Stafford Country Club in 2016.

“I feel good this week. Today was smooth, you just have to treat it like any other round of golf, or at least try to. I’ve been in contention in these tournaments before which definitely helps.”

Tomorrow, the field will play another 18 holes of stroke play before a cut is applied to keep the 40 low players and ties (as well as anyone within 10 strokes of the leader).