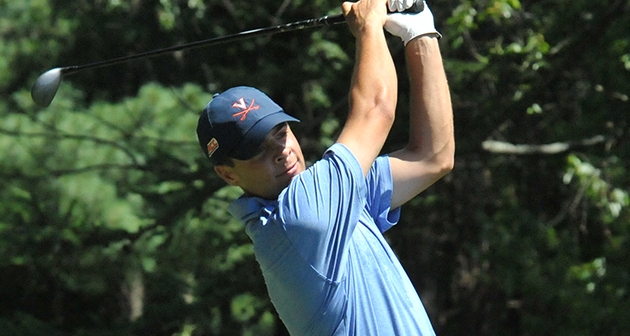 NISKAYUNA – Trying to avoid the extremely thick, wiry rough was a priority for most of the talented field in the opening round of the 94th annual New York State Men’s Amateur at Mohawk Golf Club Tuesday.

Some players opted to hit hybrids or 3-irons off the tee instead of their drivers to keep their ball in play on the relatively short 6,693-yard layout, but others chose to be more aggressive with their tee shots. Either way, it was a challenge to hit the target at the Devereaux Emmet-designed course, which is 113 years old. Once that was accomplished, only those with hot putters posted red numbers on subtle-breaking greens that ran as quick as 12 on the Stimpmeter.

Two players who found success with their game plans were Derek Bard of New Hartford and Tyler McArdell of Baldwinsville, who each shot 2-under-par 69.

“I kind of grinded it out,” said Bard, who plays out of the Cedar Lake Club. “It’s an awesome course. I think it’s toughest off the tee. It’s very demanding. I think I only used three drivers today. I hit a hybrid or 3-iron off the tee most of the time, but when I hit my 3-iron, I didn’t get in the fairway that often. I hit maybe half of the fairways no matter what club I hit. I did putt very well, though.”

Bard really got his putter going on the final three holes of the front nine with three consecutive birdies. He bogeyed the 12th and 16th holes but came back to finish off his round with a birdie on No. 18.

“My goal was trying to be around par for the opening round. There are still three more rounds,” Bard said. “I had a really nice birdie on the seventh hole, and rolled in two more birdies on the eighth and ninth. I was close on the 10th hole, but I just missed.

“I think the afternoon round will be tougher (today) because in the afternoon, the greens will be firmer,” Bard said. “I’ll have the same game plan, but I need to tighten up my tee shot.”

Bard, who will be a senior at Virginia this fall, played in both the Masters and the U.S. Open this season after finishing second to Bryson DeChambeau at the 2015 U.S. Amateur. He was fourth in last year’s NYS Amateur and is 21st in the latest world amateur rankings.

McArdell, who tied for 20th a year ago, also rode his putter to an under-par round, highlighted by a 30-foot birdie on the 17th hole.

“I hit 15 or 16 greens today,” he said. “Earlier in my round, I was trying to be conservative, but I still missed a few fairways. It was really light out with the putter for me.

“I was just trying o stay around par. This course can get to you if you’re not careful.”

McArdell, a 26-year-old course manager who plays out of the Timber Banks Golf Club, also birdied the ninth and 13th holes.

“I never played this course before until (Monday’s practice round),” Gianniny said. “I like the speed of the greens. If you feel comfortable with your driver, you should hit it, and I did. I hit some good wedge shots into the greens. But I started my round 4-over through the first five holes. I kept my head down, though, and I got through it.”

Alec Bard, headed to Penn State at the end of the month, agreed that Mohawk GC is a challenge.

“This course is tough,” he said. “If you get in the rough, you can be in there for a long time. This is a very tricky course, but I like the way I played today.”

The entire field will play another 18 holes today, after which there will be a cut to the low 40 and ties for Thursday’s 36-hole finale.