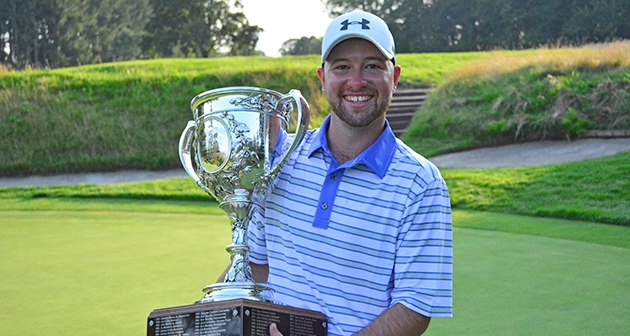 NISKAYUNA – Tyler McArdell, a 26-year-old pro shop manager at Timber Banks Golf Club, will be bringing some heavy hardware back to his office this week.

McArdell, 5-under-par for the tournament, and Jack Gianniny, of the Country Club of Rochester, who finished 3-under-par over the 72 holes, took turns with the lead during the final 18 holes. But a birdie on the 16th hole for McArdell and a bogey by Gianniny on the 18th hole decided the title. Since there wasn’t any repairing of the twosomes in the final 36 holes, Gianniny and McArdell were in two different groups. They both said they weren’t completely sure where they stood.

Derek Bard, 1-under-par, of Cedar Lake Club, who finished fourth in last year’s NYS Men’s Amateur, was third, followed by Tim Spitz of Monroe GC and Jim Gifford of the host club, who tied for fourth at 1-over-par.

The top 20 earned exemptions into next year’s event.

“Unbelievable,” said McArdell, a graduate of St. John Fisher. “I knew I was playing pretty well, and they had to go lights out to catch me. On the 12th hole, there was a photographer there who told me that Gianniny had just bogeyed and I was in the lead. I really didn’t want to know that at the time, but I rolled in a birdie on the 12th hole.

“I didn’t know where I stood when I was on the 18th hole. Somebody told me I had just won. This is just unreal.”

“This is my biggest win,” he said. “This trumps the State Open, when I tied for third while playing against the pros. With this caliber of play, this is a big tournament. Usually, the college kids win this.”

McArdell said his birdie on the 16th hole ended up being one of the key shots of the day.

McArdell said he was even better during the morning round. “I had seven birdies in the morning,” he said. “My long game the whole tournament was very strong and I made my share of putts. I love this course. I like fast, sloping greens, and this course was short, which is also pretty good for me.

“I can’t wait to put the trophy in the pro shop back home.”

Gianniny walked off the 18th hole with his head down after making the bogey which knocked him out of contention for the title. His approach shot came up just short, and his chip still left him about 10 feet from the cup.

“This is a disappointing finish for me,” he said. “I think I was a little too jacked up on the last hole. The next time I’m in this situation, I will gather myself a little better. I’ve been through this kind of thing before, but it’s been a little while.”

Gianniny refused to check out the leaderboard throughout his final 36 holes.

“I had no idea where I stood,” he said. “But I had confidence in my ball-striking, and I was putting well all week. I’m going to take a lot of positives out of this experience.”

Bard, who will be a senior at the University of Virginia and is one of the premier amateurs in the country, expected more out of himself this week, especially since he will be competing in the U.S. Amateur beginning with a practice round today.

“I was playing pretty decent this afternoon, but then I kind of fell off at the end,” Bard said. “I knew I was two back going into the ninth hole of the final round. I had a good look at a birdie putt, but then I lost focus. I was off to a great start with birdies on the third and fifth holes, but my round turned the wrong way on the back nine.”

Bard already has an impressive resume. He competed in both the Masters and the U.S. Open this season after finishing second to Bryson Dechambeau at the 2015 U.S. Amateur. He is 21st in the latest world amateur rankings.

“I came in here with the wrong mindset,” he said. “I tried to win this during the first round. Now, I’ve got a quick turnaround for the U.S. Amateur.”

Spitz birdied the 18th hole to gain a share of fourth with Gifford, the hometown favorite.

“I’m happy with the way I played,” said the 29-year-old Gifford. “I would have liked to have been a couple of shots better, but I had a lot of opportunities. I didn’t feel any pressure because I was from the host club. I set my goals pretty high. I wanted to win. I’ve won the club championship here three years in a row, and I knew the course very well. I think the course was set up just right for this tournament.”