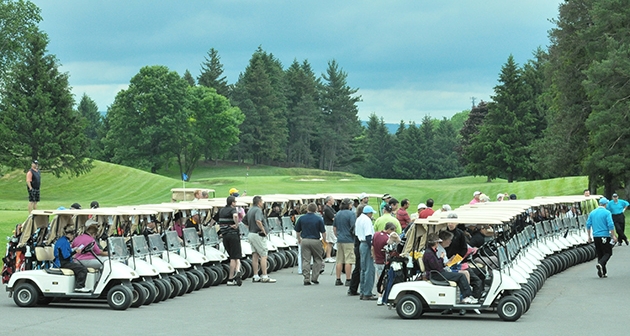 This year’s schedule contains an array of premier venues across the state. The series will kick off at Wanakah Country Club in Hamburg on May 8 (site of the 2018 NYS Men’s Mid-Amateur Championship) and finish with the Series’ Championship on October 1 at Monroe Golf Club in Pittsford.

“The Amateur Series has exceeded our expectations, growing to become an indispensable part of the NYSGA’s tournament program," said Andrew Hickey, who's had an essential role in the development of the series since he joined the NYSGA in 2009. "Each year we’ve used input provided by our members to improve the series, which has certainly been a factor as players have responded favorably each year to these changes. But the support of our member clubs is instrumental, we’re just here to showcase their facilities.”

The statewide series of handicapped (gross and net) stroke play events has become a popular way for NYSGA member golfers across New York to experience private golf courses, play with others on a level and fair playing field, and earn pro shop prizes within their divisions and flights.

Entries for the first wave of events will open on Thursday, March 1st at 9:00am and includes the following sites:

As in years past, players will earn points towards the 2018 NYSGA Amateur Series Championship based on their net finish within their flight. A player’s points total will consist of the sum of their top-5 tournament finishes. The top-104 players on the points list by season’s end will earn invitations to compete in the Championship, hosted by Rochester’s prestigious Monroe Golf Club.

New for this year, the NYSGA Team Amateur Series will be reduced to three Regional Championships: Western New York (WNY), Central New York (CNY) and Eastern New York (ENY). The WNY event will be at Stafford Country Club in Rochester on July 9, the ENY event at Copake Country Club in Craryville on July 22, and the CNY event at Bellevue Country Club in Syracuse on August 27. Eligible twosomes from around the state will have the ability to register for any of the three championships regardless of where they live. These events will be played as two-person, best-ball tournaments (four-ball), where players compete as teams and score the best ball of the two players on a given hole. Players will be able to sign up as teams of two men, two women, or a mixed couple.

Eligibility for all NYSGA events require that players to be members of the NYSGA, either through membership at an NYSGA member club or individually through an NYSGA eClub, as well as an active and up-to-date Handicap Index.