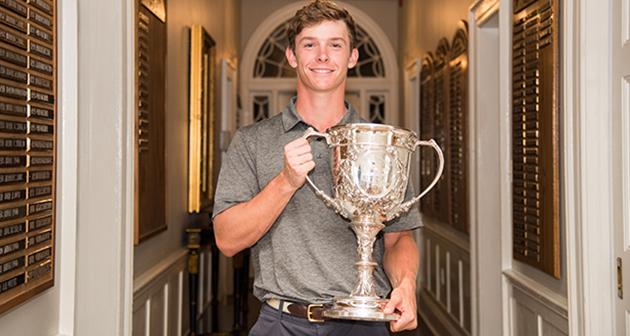 Allen finished at eight-under 280, firing a six-under 66 in his final round to claim his first New York State title.

“This is amazing. I’ve wanted to win this tournament for so long,” Allen said. “I thought it would be such a cool thing to win the state championship. Any state title is amazing. It was such an amazing week. I had so much fun here and especially this last round, that’s something I’m not forgetting any time soon.”

After the third round on Thursday morning, Allen was one stroke behind the 2019 champion, Ben Reichert, of NYSGA eClub - Western NY, who sat at five-under. The two stayed within one stroke of each other for the entire fourth round.

A major thunderstorm hit four holes into the round, dramatically softening the course and allowing for more player-friendly greens.

“I played okay in the second two rounds but I saw that I was kind of still hanging in there and then the weather delay just changed everything,” Allen said. “It just turned the tournament from surviving and making pars to you have to make a lot of birdies.”

After the two and a half hour stoppage in play, Reichert and Allen continued to match scores through the rest of the front nine. As they made the turn, Reichert maintained his one-stroke lead.

“After (the rain delay) there was no wind and it completely softened so every green you could completely fire and every pin without any worries, so birdies went from hard to get to very easy to get,” Allen said.

After fifteen holes, Allen was ahead by one stroke. He bogeyed the sixteenth, while Reichert parred to even the score at eight-under. They traded pars on seventeen, setting up a dramatic final hole of the championship.

Reichert’s second shot from the fairway flew just over the green and into the rough, setting up a difficult downhill chip towards the cup. His chip rolled past the hole, and he two-putted for bogey.

“Unfortunately I had a bad swing at the wrong time on 18. I still didn’t think it could go long but it is what it is,” Reichert said. “I’m obviously disappointed right now, but definitely, at the end of the day,  more positives than negatives to take away.”

Allen’s second shot landed to the right side of the green, setting up a near 30 foot birdie opportunity. Knowing he could two-putt his way to victory, he softly nestled his first putt to within a couple feet of the hole, and tapped in a par to win the championship.

“I was not thinking of birdie,” Allen said. “That was a 30 footer with six feet of break, downhill. All I was really focused on was just to lag it up, keep it high enough. I didn’t want to just rocket it down the hill.”

Allen’s dramatic victory comes on the heels of a 36-hole tournament he participated in on Monday. He earned a special exemption into this year’s NYS Men’s Amateur, and arrived at the classic Deveraux Emmett designed course for the first time on Tuesday morning without playing a practice round.

“This has been a crazy week,” Allen said. “I had to drive up in the morning before I played so I was coming into this place completely blind with basically just the hope of just trying to play well, not really thinking about winning much. I just came out and tried to play well and the course was really difficult.”

He noted that he started to feel comfortable with the course towards the midway point of his third round. After the rain delay softened up the course, he felt locked in for his final round.

“I spent a lot of time preparing, looking at the course on satellites, mapping it out. I felt like I had a pretty good sense of that,” Allen said. “The last time I made four (consecutive) birdies I was like 13, so that was something I’m not really used to. That tied my all-time best for most consecutive birdies in a round.”

Later this month, Allen will return to Penn State University, where he will be a sophomore on the men’s golf team.

On the other hand, Reichert had a spectacular final three rounds (66, 68, 70) after shooting five-over 77 on the first day. Aside from his Porter Cup victory two weeks ago, it had been a while since he had strung together something similar to his twelve-under 204 on the final 54 holes.

“It was a good week. After I got off to a tough start, I came back pretty strong,” Reichert said. “I had struggled for a while. I’m definitely starting to move in the right direction, no doubt about that. With this being my last amateur event I obviously wanted to win it but I’m looking forward to the next step.”

Reichert noted that he didn’t have a great feel for his swing coming down the stretch, though he was able to nearly match Allen’s stretch of birdies, highlighted by a hole-out on fifteen from the right-side bunker.

“I’ve always been a good bunker player,” Reichert said. “I’d much rather be in the bunkers around the greens than the rough, especially around here. I had a pretty clear picture of where I wanted to land it and executed it perfectly. But I had someone playing just as good as me.”

The low 20 golfers and ties earn an exemption to next year’s 99th NYS Men’s Amateur Championship, which will be held at Onondaga Golf and Country Club in the Syracuse area.