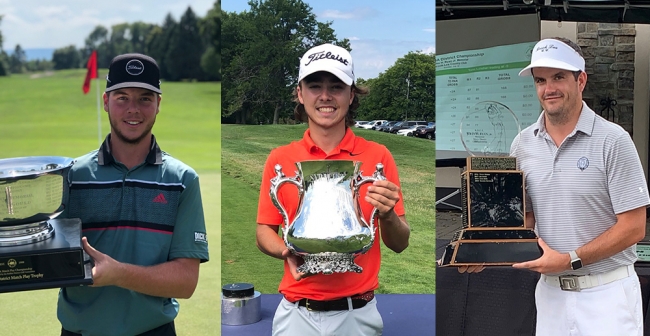 JAMESVILLE, N.Y. - The 2020 golf season in New York was unlike any other. In early summer, the NYSGA was forced to cancel all 2020 NYS Championships for the first time in history, truly marking an unprecedented time for our association and the Empire State golf community.

The USGA also called off nine out of their thirteen national championships, along with several other major golf organizations who conduct annual pro and amateur events.

With less tournament options, along with travel restrictions set by the state, competitive golfers re-focused attention towards their open city, district, county and regional championships.

Three young Empire State players stood out this season, dominating their respective areas of New York State this season and each winning several of the local top golf association events.

The most impressive of the trio was two-time NYS Junior Champion Luke Sample (Old Oaks CC) of New York. The 17-year-old had a record-setting season with his performance in Metropolitan Golf Association (MGA) championships. He became the first player in MGA history to win both the 103rd Met Junior and the 105th Met Open in the same season. In his three-stroke Met Open victory at Mountain Ridge in N.J., he became the youngest-ever to win, and only the eighth amateur. During the Met Junior finals, he defeated James Allen (Scarsdale GC), 3&2 at Rockaway River Country Club in N.J. Additionally, he finished as runner-up at the 118th Met Amateur, tied for 10th at 65th Ike, and placed third at the 14th MGA Carter Cup. Sample was honored as the 2020 MGA Junior Player of the Year, finishing with a record points total. He also was recognized as the WGA Junior Player of the Year.

Western New York’s Anthony Delisanti (Willowbrook GC) dominated the Buffalo District Golf Association (BDGA) schedule, winning every championship he participated in. The 17-year-old became the youngest to win at the 97th BDGA Individual at Springville Country Club, the BDGA Match Play, 4&3 over Tommy Rajczak (NYSGA eClub - WNY) at Gowanda Country Club, and the 98th BDGA Junior Match Play, 2-up over East Aurora CC’s Charlie Fischer (who won the junior stroke play) at Delisanti’s home course. He was awarded 2020 BDGA Men’s Player of the Year for the first time, after holding the Junior Player of the Year title in both 2018 and 2019.

In Central New York, Johnny Gruninger (Bellevue CC) captured each of the Syracuse District Golf Association (SDGA) championships he played in. He won the 48th SDGA Gerry Ashe Memorial at Lakeshore 1860 by three strokes, the 105th SDGA Match Play 1 up over Nick Bove (Timber Banks GC) at Skaneateles Country Club, and the 57th SDGA Junior Match Play in 19 holes over Gabe Williams (Seven Oaks GC) at Drumlins Country Club. He also teamed up with his dad to win the SDGA Father & Son at Cazenovia Golf Club, and was honored as both the 2020 SDGA Player of the Year and Junior Player of the Year. He’d previously won the junior honor in 2019 and 2017.

Dan Gabel (Spackenkill GC), won the 56th Dutchess County Amateur at McCann Golf Course by four shots over brother Ryan. He totaled an even-par 216 to capture the championship for his fifth time.

Evan Sitts (Oneonta CC), won for his first time in both the 91st Triple Cities Golf Association Amateur (TGCA) and the 44th Otsego County Amateur (Atchinson Cup) this season. He finished tied with Hogan Bendert after both posting 219 over three days at Conklin Players Club, En-Joie Golf Club and Binghamton Country Club for the TCGA Amateur. Sitts won on the first playoff hole at Binghamton to win the title, and eventually TCGA Player of the Year. In the Otsego County Am, he totaled 1-over 145 over two days at Colonial Ridge and Oneonta CC.

The 55th Delaware County Amateur was won by Floyd Eighmey, posting 6-over 222 at the College Golf Course at Delhi after a runner-up finish last year.

Ky Horn cruised to a 10-stroke to secure his first Craig Wood-Ray Randall Tournament win and totaled 146 at Craig Wood Golf Course. He was the only player to shoot a round under par in the two-day event, and bounced back from last year where he lost in a playoff to finish runner-up.

In the Jefferson County Amateur, Adam Brown captured the title by a stroke with 140 over two rounds at Willowbrook Golf Course.

Ryan Borruso (Teugega CC) won the 57th Rome City Amateur title for the third time in the past four years. He shot 147 during rounds at Rome Country Club and McConnellsville Country Club, respectively.

Doug Hart (Hales Mills CC) was the amateur division winner during the 75th edition of the Tupper Lake Open and finished at 1-over 143. Korn Ferry Tour pro Matt Campbell of Rome won the open title and set two records in the process; a course record score of 62 (par 71), and record low total of 130 at Tupper Lake Golf Course.

Two of New York’s top invitational tournaments, the 61st Porter Cup and 80th Monroe Invitational were canceled for the first time in their long histories. Several top junior showcases in the state were scratched as well, such as the NYSPHSAA Golf Championships, NYS Junior PGA Championships, the International Junior Masters invitational, among others.

In Western New York, Julie Murphy (Brookfield CC) won the BDGA Women’s Amateur by three strokes, with a total of 161 at Springville Country Club. She captured the NYS Mixed Team Amateur with her husband in 2017.

In the only Central New York tournament, Emily Gresham (Seven Oaks GC) won the 30th AIM (Post-Standard) Women’s Amateur over 36 holes at Beaver Meadows Golf Club and Cavalry Club. She finished at 153 and edged the field by a stroke.

Carmen Cring was the winner of this year’s Jefferson County Women’s Amateur at Willowbrook Golf Club in Watertown.