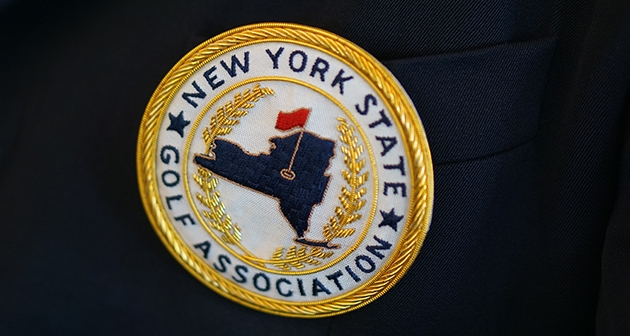 JAMESVILLE, N.Y. – The New York State Golf Association announces a new slate of Officers and Executive Committee members, whose terms became effective on January 1st, 2019 and will extend through December 31st, 2019. The following officials were voted into office by the General Committee during the 2018 Annual Meeting at Saratoga Golf & Polo Club in early November.

Although there were no changes to the officers in 2019, the NYSGA welcomes three new Sectional Affairs committee members to the Executive Committee including Brian Clark of Orchard Creek Golf Club, Ryan Gabel of Powelton Club and Doug Vergith of Chautauqua Country Club.

As the NYSGA looks towards the year ahead, our President expressed his thoughts in the following message to his fellow association members:

As I enter my second year as president of the New York State Golf Association, I’m pleased with the progress we have made throughout 2018, and plan to continue building upon those successes in 2019.

Last January, the NYSGA signed an Allied Golf Association agreement with the United States Golf Association (USGA) to become one of 59 regional golf associations throughout the country. The new relationship allows us to enhance the golfer experience in our state through improved communication and resource management with the USGA. We’ve also collaborated with the Buffalo District Golf Association, providing support and resources to their district championships and other initiatives. This collaboration is very similar in structure to our relationship with the Syracuse District Golf Association. We made great progress during the first season working closely with the Buffalo District and look forward to building upon this momentum in 2019 as we continue to help them deliver quality events and services.

Two new championships were added to the NYSGA calendar this past season, the New York State Women’s Four-Ball and the Women’s Senior Four-Ball, both conducted simultaneously at Cornell University’s Robert Trent Jones Golf Course in June. These inaugural events provided another opportunity for amateur female players in New York State to play competitively on the state level. With team formats becoming increasingly popular in recent years, it only felt natural to add this championship to the NYSGA’s annual schedule of competitions.

Four other state titles were decided by playoffs including the Boys’ Junior, Women’s Senior, Men’s Senior and Men’s Mid-Amateur. Eleven new NYSGA champions were crowned in 2018, joining a list of accomplished amateur golfers who have come before them. Twelve other golfers reclaimed a past title or captured a new one. Please visit our website for a complete list of state champions and runner-ups from this past season.

We welcomed three newly elected representatives onto our Executive Committee in 2019, including Brian Clark of Orchard Creek, Ryan Gabel of Powelton Club, and former Executive Director of the Long Island Golf Association, Doug Vergith of Chautauqua Country Club. Conversely, three others will be stepping off the board including Jim Coleman of Links at Erie Village, Ron Socash of Elmira Country Club and Edward Stanek of Lancaster Country Club. I’d like to thank these individuals for their selfless commitment and service to the NYSGA during their time on the Executive Committee. It has been a pleasure working so closely with them on the board and we look forward to their continued support on the sectional affairs and course rating committees.

The Foundation continues its fundraising efforts for the Betty Deeley Endowed Scholarship, the first of its kind at the NYSGA. This scholarships honors Mrs. Deeley, a member of the NYSGA Hall of Fame and 42-year chair of the NYS Girls’ Junior Amateur Championship. It will fund scholarships for female junior golfers in financial need, and the NYSGA has pledged to match up to $30,000 in donations. I ask that you please consider a donation of any amount to the NYSGA Foundation and help support the game in New York State through junior golf grants and scholarships.

With the modernization of the Rules of Golf that went into effect on January 1, 2019, the NYSGA is planning additional educational opportunities for New York’s golfers. This will include regional introductory Rules seminars covering the major changes, held in Albany, Binghamton, Buffalo, Syracuse, and Utica. These seminars, which are free to attendees, will be held on Saturday mornings in March and April. In addition, we’ll be holding full-day workshops available to anyone looking to receive a more in-depth overview of the Rules, in which attendees will be required to pay a fee.

There are big changes coming to the NYSGA headquarters with the addition of two full-time staff members to support the tournaments and membership departments. For tournaments, we are hiring an Assistant Director of Rules and Competitions to take the reins of the popular NYSGA Amateur Series and handle all tournament related administration for the 17 state championships. We are also taking the former part-time Director of Course Rating position and adding GHIN services to provide another full-time staff opportunity. This person will lead the course rating efforts and be an administrator for the Tournament Management software and any GHIN-related issues.

Thanks again to the staff and volunteers who give their time and other contributions which help to make this all possible. I also would like to thank everyone else in New York State’s golf community for your continued support of the NYSGA’s mission. It’s an exciting time to be a part of golf and I look forward to another successful year in 2019!

Warren Winslow
President, NYSGA
To see the complete list of NYSGA Committees and their membership, click here.
« Back to Listing
Media