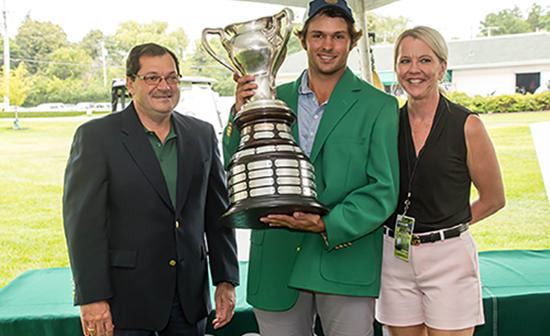 Reichert, who won the NYS Men’s Amateur in 2019, posted just three bogeys throughout the week’s 72 holes of stroke play. In one stretch, he went 29 consecutive holes without a bogey.

He carded a six-under 64 in his first round to jump out to an early lead. Sitting three strokes behind him after 18 holes was New York city native, Ethan Ng.

Reichert shot a 70 in the second round, while Ng followed with a 68 to pull within one stroke of the lead. In the third round, three birdies helped Reichert post a 67, while Ng’s 69 allowed Reichert to open a three-stroke lead over the fellow NYS native headed into the final day. Reichert’s three-round score was nine-under 201, while Ng sat at six-under.

On Reichert’s heels as well was the tournament favorite, Garret Rank of Ontario, who sat at even-par after two rounds and carded a seven-under in his third to land at second place with 18 holes remaining.

Ng pulled to within one stroke as he headed to the seventeenth tee box. Although, while setting up his approach shot on that hole, his practice swing hit a tree and caused the ball to move, resulting in a two-stroke penalty. He double-bogeyed the hole, causing him to all but fall out of contention.

Rank was also within one stroke after 16 holes. Playing a group ahead of Reichert, he parred 17 and bogeyed 18. After a par on 17 for Reichert, he needed no worse than a bogey on the par-three eighteenth to clinch the title. His tee shot was sent over the green, seemingly headed out of play. However, the ball bounced and hit off a spectator’s seat, kicking back into play. Reichert chipped his second shot within four feet and sunk his par putt to win.

Reichert finished at 269, Rank was second at 271, while Ng finished tied for third at 272 with Chris Francoeur of Amesbury, Massachusetts.

(Photo courtesy of The Porter Cup)