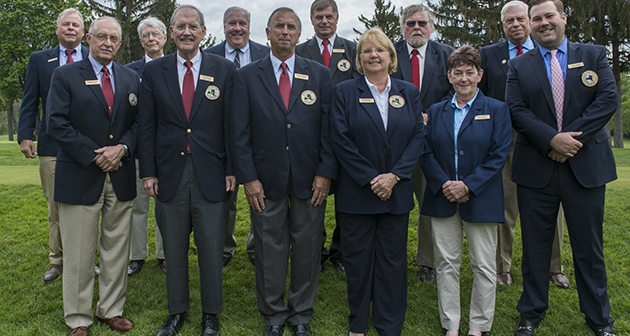 JAMESVILLE, N.Y. -- Along with the new year comes a new slate of New York State Golf Association (NYSGA) Officers and Executive Committee members, whose terms became effective on January 1st, 2018 and will extend through December 31, 2018. The following officials were voted into office by the General Committee during the 2017 Annual Meeting at Bellevue Country Club in early October.

In addition to the officer changes, two Sectional Affairs committee members were elected to serve on the Executive Committee; John Cooney of Olde Kinderhook GC and Jamie Miller of Wanakah CC. The NYSGA’s most recent leader, Joe Strykowski of Elmira CC, will transition into a position on this committee as well after serving as President from 2015-17.

As the NYSGA looks towards the year ahead, our new President expressed his thoughts in the following message to his fellow association members:

Welcome to 2018. The NYSGA staff and volunteers are preparing for an exciting year of New York State (NYS) and United States Golf Association (USGA) Qualifiers, NYS Championships, and Amateur Series events.  I am thrilled to be the 44th President of the NYSGA and look forward to helping make it even better going forward.

I was introduced to the NYSGA when I was the narrator for the USGA course rating at Western Turnpike Golf Course in Guilderland. The rating team leader, sensing my interest in the process, invited me to become a course rating team member. At the same time my interest in the rules grew and I attended an introductory two-day rules workshop followed the next year by attending a full three-and-a-half-day workshop. Soon after that I added working as a rules official at NYSGA events to my course rating duties. Now, about 15 years later, it has culminated being elected president of this terrific association.

This season, the championship schedule has grown to include sixteen events with the addition of the Women’s Amateur Four-Ball at the Robert Trent Jones Golf Course at Cornell on June 28. Four-Ball events have gained a lot of popularity in recent years and the single-day championship will be a great addition to the tournament schedule.

I encourage everyone to visit the website NYSGA.org to view the entire schedule of events. The full schedule including sites should be finalized by February 1.

Beginning this season, we’ll be exclusively utilizing the tournament software, Golf Genius, which has recently emerged as the premier software for state and regional golf associations and member golf clubs around the country. The new software will enhance many facets of the NYSGA staff’s tournament administration efforts. We introduced the software during the 2017 Championship season and received positive feedback from both tournament players and member club professionals and are looking forward to all the advantages the software will provide.

The NYSGA Foundation, which administers our scholarship program and grants for junior golf development has begun its efforts to create an endowed scholarship in honor of Betty Deeley. Betty, a member of the NYSGA Hall of Fame, was a longtime volunteer and advocate for women’s golf. I’m hoping during my term to advance the creation of endowments for scholarships and grants to promote the game of golf and its future participants.

I want to thank, in advance, all the staff and volunteers who give their time and other contributions which makes all this possible. None of these events would be as masterfully run without your efforts. It has been a pleasure to work with you in the past and I hope this great relationship extends well into the future.

Warren Winslow
President, NYSGA
To see the complete lists of NYSGA Committees and their membership, click here.
« Back to Listing
Media