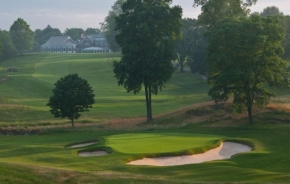 Wykagyl is one of the most challenging and beautiful courses in the country and has been host to many charitable events throughout the years.  It was first conceptualized in 1898 by a group of ardent sportsmen, anxious to pursue the new game. In 1904, the Members found a new home for their vision in the historic town of New Rochelle.

The original course was laid out by Lawrence E. Van Etten, who had joined the club in Pelham in 1904. The course was changed in two steps by two noted golf architects. Donald Ross then redesigned several holes in 1919 along with A.W. Tillinghast, including a totally new 17th hole and the shortening of the 18th hole of which Harry Vardon was so fond. In 1994 the Club commissioned noted golf course architect Arthur Hills to supervise a makeover of the entire course and finally in 2005, the Club hired the firm of Coore-Crenshaw to maintain the legacy of Wykagyl’s storied golf course.

Well along toward its next 100 years, Wykagyl enjoys a healthy membership, one of the best golf courses in the metropolitan New York area, and facilities designed to preserve Wykagyl’s stature as a premier club for years to come.