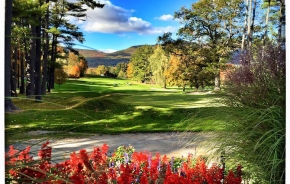 A Brief History of the Woodstock Golf Club.

The Woodstock Golf Club, originally called the Woodstock Country Club, opened in the
spring of 1929. The founders' short-lived vision of an 18-hole course, tennis courts, and
a posh clubhouse succumbed to the Depression, but the club survived—the name was
changed in 1980—and continues to thrive.

Since the beginning of the 20th century, the town of Woodstock has been known as the
Colony of the Arts. Fittingly, artists have played a prominent role in the life of the golf
club since its inception. Among the local artists who were members of the club in the
1930s and beyond were the landscape painter John F. Carlson, who was a founder of
the Woodstock Artists Association; the Pulitzer Prize-winning cartoonist and facetious "
inventor" Rube Goldberg; the influential painter Charles Rosen, who was a vice president
of the club in the early 1930s; and Anton Otto Fischer, a noted illustrator of books and
magazines and a painter of landscapes and seascapes, whose works today grace the walls
of the clubhouse.

The nine-hole course today makes the same roughly circular, counterclockwise sweep,
with a back-and-forth jog in the middle, that it did in the beginning. Bounded by Route
375 (known in 1929 as the Kingston Road), Birch Lane, the Sawkill Creek, and Route
212, the course measures 5,456 yards and plays to a par 70 for 18 holes. The course was
originally designed by Ralph Twitchell.

On September 4, 2012, 16-year-old Ethan DeForest, a high school junior, shattered
the competitive course record of 63 by shooting a stunning 10-under-par 60 en route
to winning the amateur division in the 77th Woodstock Open. Ethan’s historic round
included two eagles, seven birdies, and a single bogey. Also in the Open field that day
was Ethan’s father, John DeForest, a longtime golf professional from the area, who was
one of four men who held the previous course record.

The Woodstock Open is reportedly the longest-running U.S. golf tournament held at the
same course and open to both amateurs and professionals. The legendary Gene Sarazen
competed twice in the Open in the 1960s, remarkably failing to win either time.

Golfers at Woodstock are challenged not only by the Sawkill Creek, which comes
directly into play on the finishing hole, a long par 3, but also by rugged rock ledges,
stately trees, and ponds that are home to waterfowl and native vegetation. The historic
clubhouse, with its outdoor deck, overlooks the rushing Sawkill and offers a view of the
first tee and fairway, making it a perfect place to relax, before or after a round of golf.