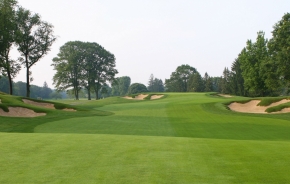 The name “Wheatley” appeared on maps of the area, currently referred to as East Williston, as early as 1758. Wheatley Hills Golf Club was organized in 1913 and consists of 110 acres ultimately purchased from the A. H. Titus Estate for forty eight dollars per acre. The Titus homestead was converted into a clubhouse.

While our current facilities were altered considerably in 1926, portions of the old homestead were preserved and are most evident in our main lobby area. The bell used by the Titus family to call their farmhands from the fields has also been preserved and has become the official emblem of our club. It is prominently located adjacent of our putting green. Remnants of The Long Island Motor Parkway, constructed by the H. K. Vanderbilt family in 1908 – 1911, are still evident behind our third green. It was probably the first “Limited Access” road in the country built to accommodate a sport – The Vanderbilt Cup Races.