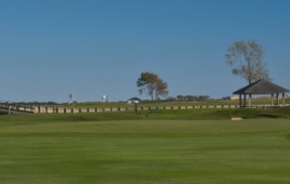 The Rockaway Hunting Club is the oldest country club in the United States, although not originally a country club in today's sense of the word. Its principal clientele was the horse set, and it featured Fox Hunting and Steeplechase Racing.

In 1877, a group of young men from Bayswater in Far Rockaway took part in a Chase between Lawrence and Valley Stream. They organized a club in Bayswater in 1878, but in 1884, residential development forced a move to the present location in Lawrence. There the members built a clubhouse considered the largest, most luxurious on Long Island. It overlooked Reynolds Channel, Long Beach, a polo field and a four-mile steeplechase course.

Rockaway's initial fame came from polo, creating a bitter rivalry with Meadow Brook Hunt. By 1888, the two clubs were so superior to all others that a handicap system was created. The Rockaway team won national championships in 1901 and 1902. The world-champion Rockaway team was headed by Foxhall Keene, who was rated the best all-around polo player in America for eight years in a row and is certainly the greatest athlete in the club's history.

James R. Keene, Foxhall's father, once offered a $100,000 wager that no one could beat his son in a contest including 10 sports - there were no takers. During the late 1890s, Foxhall took a brief respite from polo and developed into one of just two scratch golfers in the Met district - the other being Walter Travis. He competed in the 1897 U.S. Open, and advanced to the quarterfinals of the 1898 U.S. Amateur, where he was defeated by Travis.