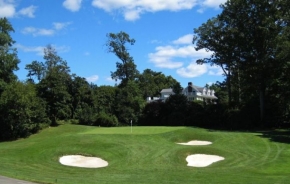 As with all great traditions and places, there is a story. Apawamis’ story demonstrates the richness of the Club’s enduring legacy and the origin from which the founding of the Club was inspired. Traces of its beginnings date back to the year 1890, during which a group of established gentlemen sought to form a social club for use for their families and themselves.

The origin of the Club’s name refers to an area in the southwest section of Rye, now called Rye Neck, formerly called Budd’s Neck (after John Budd who purchased it in 1661), that was originally called Apawamis by the Native Americans. The name is derived from the words "appoqua," which means “to cover,” and "mis," meaning “the trunk of a tree;” together the name implies “the covering tree.” Further lending to its intention of creating a haven for its members, the Club logo which bears the words "In Pace, In Bello, and Instans" means "pressing on in peace and in war" reflecting that Apawamis would be a touchstone for its members, no matter how turbulent or calm the times.

The first recorded location of the Club was two rooms in a Rye Boarding House of a Mrs. Mulholland, which is now the site of the Blind Brook Lodge. In February 1891, the Club moved a few hundred yards down the road to lease a property known as Kirklawn, which is now where Resurrection Church resides. In late 1898, the lease at Kirklawn expired and the Board arranged a deal with the Charles Park Estate to purchase the land on which the Club now resides today for $50,000. Upon completion of the purchase of the land, the Club’s Board worked to develop plans for its Clubhouse; records detail the goal was to ensure that it was “not pretentious, but comfortable and ample for our needs.” That plan was realized at a construction cost of $13,737 and completely furnished for $2,165; construction of stables and a caddie house totaled an additional then-steep cost of $1,500.

In 1907, ever ambitious and with eyes on the future, the Board and certain members saw the need for a more elaborate Clubhouse to be more competitive with the luxurious clubs that were starting to spring up around the county. However, fate played a hand in this plan on February 4, 1907, when a fire broke out and, before being extinguished, had destroyed half of the Clubhouse; valuable paintings, trophies and early records were lost. By Thanksgiving Day 1907, the cornerstone was laid for the Club’s present home and by August 1908, at a cost of $60,000, the new building with its decorations and furnishings was complete. In the years since, additions have been made to allow the Club to grow with the needs of the membership.

The golf course took shape in the early 1900’s, which was stewarded through design by the then Chairman of the Golf Committee, Maturin Ballou, who astutely enlisted the assistance of a then lesser known young Scottish professional named Willie Dunn. Mr. Dunn had traveled to the U.S. to build what is the now fabled links at Shinnecock. Few major changes have been made to the course since its original design and, in fact, the course renovation of 2001-2002, under the skillful guidance of architect Gil Hanse was, in certain respects, a restoration.

Lending to its tenure as one of the earliest golf clubs in America, Apawamis has a seasoned history of hosting and participating in annual tournaments and events of historic significance since its founding. In 1911, the Club was honored to host the US Amateur Championship. The 1911 Championship is known for being the first American Championship to go beyond 36 holes, resulting in a spirited playoff between the then reigning British Amateur Golf Champion Harold Hilton and his lesser-known American opponent, Fred Herreshoff. The two surged ahead of a notable field of former Amateur champions that included Francis Ouimet, Walter Travis, Jerry Travers, Charles B. MacDonald, Robert Gardner and William Fownes.

After defeating Chick Evans in the semi-finals, Herreshoff stunned viewers by wiping out Hilton's six-shot lead in the final round. The two golfers faced off in an unforgettable overtime match that resulted in a controversial shot on the 37th hole by Hilton that ricocheted from a rock onto the green, causing Herreshoff to lose his composure, top his shot and lose the tournament.

Other key notable annual tournaments the Club has participated in for over 30 years is The Julian Curtiss Cup match, a series held exclusively between clubs that are more than 100 years old, including venerable founding clubs such as Baltusrol, Greenwich Country Club, Dorset Field Club and The Saint Andrews Club. The annual teams for the “Four Corners” match are typically selected during open qualifying tournaments within the club. The Club has played host to the USGA Girls' Junior Championship in 1970, the USGA Curtis Cup in 1978, and USGA Senior Women’s Championship in 2005.

No event, however, is more closely woven into the Apawamis fabric than the United States Seniors' Golf Association’s annual tournament. It was the brainchild of member Horace Hotchkiss, who in 1905 invited a group of friends and acquaintances, all of whom were at least 55 years of age, for a one-day, 36-hole stroke play competition. Some 50 players gathered on October 12 for the world’s first-ever “seniors” tournament.

For years, it was played in the fall, but the date was changed after the surprise hurricane of 1938, which arrived mid-tournament and flooded the course. Today, the Seniors tournament is held on the first Tuesday and Wednesday in June, with some 500 players competing over 36 holes at Apawamis and nearby Round Hill, Blind Brook, and Bedford.

By the turn of the century, tennis had gained popularity and, in the summer of 1902, two new tennis courts were opened for play. Since that time, tennis at Apawamis has flourished with a busy inter-club schedule, several high-profile tournaments, and many nationally ranked players among its members.

The origins of squash at Apawamis are historically significant as it can be said that Apawamis played a prominent role in the development of the game, then known as “squash tennis.” It was in 1904 that the first squash house at Apawamis, comprising of two courts, was built in an area near the old stables. It is believed that this was only the third such facility in the country built on club grounds after Tuxedo and the New York Racquet Club. Several years later, with the popularity of this new sport on firm footing, the courts were moved to the area of our current location. Although there have been many renovations and conversions of court size, Apawamis has kept pace with the times and proudly boasts one of the finest squash programs in the country.

The Club’s support of the renowned athletic programs and the ongoing upgrades and renovations to the Clubhouse and athletic facilities demonstrates the Apawamis membership’s appreciation of the Club, for its history and traditions and for the platform it provides for friendships, family get-togethers and for building memories.