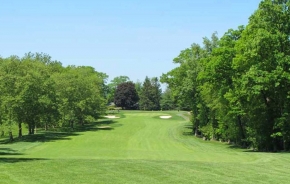 SUNNINGDALE COUNTRY CLUB was organized in November, 1913 and was named after the renowned British golf club. The club’s founders were committed to establishing a preeminent club in the region and it was an immediate success as the membership roll quickly filled.
Initially the club leased a nine hole golf course in Mount Vernon which had been occupied by Siwanoy Country Club. In 1916 it was decided to purchase the Overlook Golf Course which occupied 149 acres at the club’s current location in Scarsdale.  The sight is historically noteworthy as it was an encampment for French forces when they joined the American colonials in their fight against the British in 1781. The Site Committee of the club’s Board of Directors observed at the time: “as far as desirability, practicality and beauty, there are few locations in Westchester County superior to the proposed site”.  They went on to say: “that land can be turned into one of the finest courses in the Metropolitan region.”
The course on that location was indifferent and Seth Raynor was hired in 1916 to redesign the course and bring it to it’s potential.  A stunning clubhouse was built by leading architect Robert Kohn, highlighted by a vaulted living room ceiling with a large fireplace and expansive West facing terrace dramatically overlooking the golf course and setting sun. These prominent features remain today. The new club opened on Memorial Day 1918 and 100 additional members were brought in.