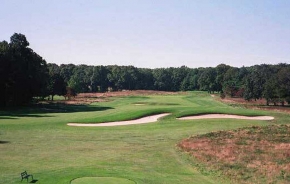 C.B. Macdonald designed Piping Rock right after he completed No. 8-ranked National Golf Links, and just as he did there, Macdonald peppered Piping Rock with versions of his favorite design concepts, including a canted Redan green and a Road Hole based on the 17th at St. Andrews. But it was at Piping Rock, not National, where Macdonald first introduced what has become his most imitated hole, the Biarritz. It’s the eighth hole at Piping Rock, with a green 60-yards-deep, bisected two-thirds of the way back by a 6-foot-deep trench. Designer Bruce Hepner recently enhanced the course by removing trees, reinstating old cross-bunkers, recapturing green sizes and adding tightly mown areas green surrounds to some holes. But he didn’t change the design. Piping Rock had great bones to begin with.