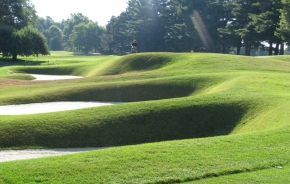 Since its inception in 1923, Monroe Golf Club has long been regarded as one of the premier private clubs in Rochester and throughout Western New York. The club’s award winning Donald Ross designed golf course is viewed by many as one of the most classic and preserved layouts from Mr. Ross’s original designs and has hosted numerous championships over the past 90 years including the 2014 Wegmans LPGA Championship, New York State Men’s Amateur and the nationally recognized Monroe Invitational Championship to name a few.