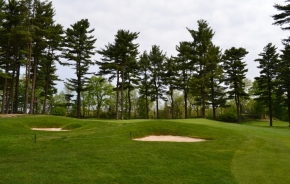 In the early 1900’s, the newly imported game of golf was all the rage with courses being laid out with some frequency. In 1916, our twelve founding fathers formed Irondequoit Country Club and began to look for a site for their club.  At this time, land on East Avenue became available and was purchased. The distinguished Scottish golf course architect, Donald Ross designed the nine-hole course on the hilly East Avenue terrain.  With horses and men, Ross fashioned a tract of 3,100 yards containing three par-threes, three par-fours and three par-fives.  Ross had intended the course to be played twice totalling 6,200 yards, and although relatively short in distance, Ross compensated for this by creating a challenging lay-out over the hilly terrain, which produced many side-hill, down-hill, and up-hill lies, all commanding a golfer's best shot. In 1952 a second nine holes was added when land was purchased from neighboring Oak Hill Country Club. The newly purchased property incorporated a meandering creek that would come into play on several holes. While hills were not present on the back nine, and it contained only one par three and one par five, it was made difficult by its tree lined fairways, long and demanding par fours, the meandering creek, and undulating greens.

The original clubhouse designed by Herbert Stern, one of Rochester’s leading architects was destroyed by fire in 1929. The building was replaced with an art deco structure which was remodeled in 1950 to accommodate a growing membership and again renovated in 1980. In May of 2009 an extensive remodelling renovation of the existing interior spaces and the exterior of the clubhouse was completed. In addition to the clubhouse renovations, a plaza was created to provide a dramatic entrance to the pool, snack bar and seating area overlooking our facilities. The exterior of the club received a facelift with new stucco finish and rooflines reminiscent of the prominent villa style mansions along East Avenue.