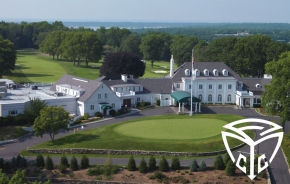 From the beginning, Fresh Meadow traveled first class. The members wanted their course to be one of the country’s great examinations of golf, up to testing the leading players in major competition. To this end, they engaged A.W. Tillinghast to design the course, which opened in 1923.

The following quote from a newspaper report is typical of the reception it received: “News of the Tillinghast Course” in Flushing, New York, had started to spread throughout the golfing world. When the course was officially opened large numbers of golf celebrities and experts came from far and near to test its rigors. What they found was a course in exquisite condition, as though it had been groomed for a decade, and of scenic delight. It contained holes of fascinating variety, some fairways finding their way through groves of towering trees, others with water obstacles on the way to the greens; doglegs with treacherous sand traps as they curved around corners to the left and to the right; out-of-bounds galore to plague the ‘hooker’ and ‘slicer’ alike; the famous Tillinghast pear-shaped greens fiercely trapped. All these features created one of the finest tests of golf anywhere."

The new course was dedicated on September 8, 1923. Nine days later, the clubhouse burned to the ground. Typical of the membership, it was rebuilt on an even grander scale, and opened late in 1924.Gene Sarazen was hired as professional in 1925. The Squire brought along his mentor, Al Ciuci, to teach and run the shop. Ciuci remained until 1972.Fresh Meadow gained national prominence during the 1930 PGA Championship. Tommy Armour won the title after a back-and-forth struggle with Sarazen in the finals