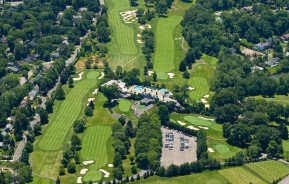 The big course was replaced in 1924 by an A. W. Tillinghast layout and was considered one of his finest.

In 1936 the club was reorganized by its members and became known as Fenway Golf Club.

Fenway is best-known for its greens, many of which are pear-shaped and sloping back to front, with deep bunkers protecting narrow entrances, all trademarks of the Tillinghast genius. The par-five third hole is the Club's centerpiece.  The drive must avoid three fairway bunkers, and the second shot a nest of four bunkers. The elevated green is two-tiered, the higher right side set behind a pair of huge bunkers.

The 15th is a devlish little par four with a small, tightly-trapped hourglass green that slopes severely back toward the fairway. The green can't be more than 12 feet wide, making it an extremely difficult target to hit and hold, even with a perfect explosion from one of the greenside bunkers.