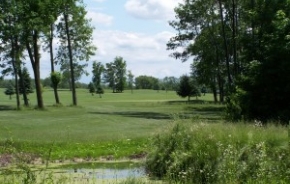 In 1992 Bradford Davis agreed to turn his farm into a golf course.

In the spring of 1998, construction began on a new clubhouse. The structure replaces an older building and recalls the grand old barn of the Davis Dairy Farm. Out on the back nine, a pond has been created that affects play on three holes.  The par-3, No. 14 was made a little longer by about 12 yards.  Hole No. 15 has a new tee-box and is also somewhat longer.  An elevated tee was built on hole No. 12.

In 2001 the club house (BW’s Restaurant) opened the doors to expand the golf courses potential for tournaments, banquets and receptions. With a 200+ seating capacity our banquet hall is a great place for your next gathering of any type.

In 2007 there was a shelter/bathroom built out on the course also hole No. 13 went thru some changes when the ditch in front of the green was replaced with 100′ of 36″ pipe to help speed up play and add a more pleasing look and playability to the hole.

In 2008 hole No. 16 undertook a face lift by clearing some of the trees that blocked the green from needed sunlight and air movement. Also in the process a pond was added to the left of the fairway.