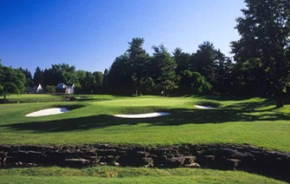 One of the oldest golf clubs in America, the Country Club of Rochester (CCR) is a championship golf course in the towns of Brighton and Pittsford, in suburban Rochester, New York. Members of the Genesee Valley Club founded the golf club in 1895, on a farm four miles east of downtown.

The original course was of a rather primitive design, reflective of the early era of golf. In 1912, the club hired the Scotsman Donald Ross to design a more modern course on the same grounds. Ross became one of the most famous golf course architects in the game's history. Years later, the Country Club of Rochester course was refined by Robert Trent Jones, a local man who was inspired by Ross as a boy, and ultimately followed in his hero's footsteps to become one of the most famous architects in the game.

The golfing legend Walter Hagen started caddying at the Country Club of Rochester when he was 7½ years old. He progressed to become the assistant club professional, and won the 1914 U.S. Open. Later named head pro at CCR, Hagen went on to be one of the most influential figures in the history of golf, winning 11 majors, 44 official tournaments and dozens of exhibitions, while becoming one of the greatest ambassadors the game of golf has ever known.