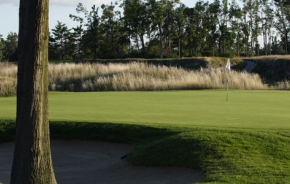 The Country Club of Buffalo has been an important part of the history of Buffalo, and its members have provided civic and business leadership throughout the community. The present location of the Country Club of Buffalo is actually its third. The Club was incorporated on February 11, 1889, and its first clubhouse, designed by E. B. Green, was opened in August of that year. Three of the founders of the Country Club were among the founders of the Buffalo Polo Club in 1878. Polo continued to be played on the Club grounds until 1935. In 1894, Club members placed an empty tomato can in the ground, and thus was born the first golf hole in Western New York. The Club moved from its city location at Elmwood and Nottingham in 1899 to make way for the lavish Pan American Exposition. During this time, the clubhouse became the Women’s Building and the center for all women’s activities. The Club acquired land on the city line at Main and Bailey in 1900 and had the new course ready for play in 1902, with a new clubhouse designed by George Cary. During 1910 and 1911, Walter J. Travis revamped the course in anticipation of attracting a major tournament, which turned out to be the 1912 U.S. Open.

Acquisition of property in Williamsville began in 1922, and the Donald Ross designed course opened in 1926. The clubhouse, designed by Duane Lyman, opened in 1927. The United States Women’s Amateur Championship was played on the new course in 1931, and the Curtis Cup was contested in 1950, with the American women defeating the British. The Carling Cup Matches between pro-amateur teams from the U.S. and Canada were held in 1960, and in 1962, the National Junior Girls Championship was played at the Country Club of Buffalo.