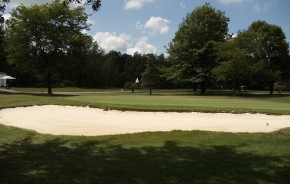 Braemar Country Club is a championship design layout semi-private club designed by Morrison & Morrison in 1927. The front nine was opened in 1928, and the back nine was added in 1967. It is a par 72 with a total yardage from the blue tees being 6,797, from the white tees 6,476, the gold is 5,663, and the red is 5,352. Regardless of your length off the tee or ability level, your short game will play an important role in scoring while playing at Braemar Country Club. Manage those shots and the courses large, well-maintained greens will reward those players who putt well.

Three years ago Walt and Steve Pavlovych took ownership of the club along with their mother Lesia. With the help and support from their family, they began a “rebuilding” project to bring the course back to its place of prominence, as one of the area’s top public golf facilities among Rochester’s west side courses.

In addition to the many renovations that have already been done, there are currently more improvements underway or planned for the near future. For example, renovations include the mound of soil in the middle of the course becoming a new, elevated Tee Box, complete with an arrangement of flowering plants and the Braemar Logo.